My first experience reading Fletcher was Beyond Redemption where he (unintentionally) butchered my mother tongue, German, but at the same time, he expertly used Psychology—the subject I studied at university—as his playground. The former made my eye twitch, the latter delighted my soul. With Ghosts of Tomorrow he solidified himself as one of my must-buy authors.

Smoke and Stone takes place in the walled city of Bastion—the last city of man. Beyond its outer walls, which have no gate, there is nothing but an endless desert and death. Inside, the remains of mankind exist in a stratified society.

The ringed structure of Bastion divides mankind into what essentially are castes. Unprivileged and destitute people inhabit the outer rings, which are rife with violence and crime, reminiscent of slums in our world. The wealthy and the powerful inhabit the inner rings, enjoying both money and power.

The two innermost rings belong to the Gods and the priests, followed not by the senators, not the crafters, but—surprise, surprise—the bankers.

The outermost ring is the most populated one and belongs to the farmers. Despite making up over half of the population, the Growers, or Dirts as they are called by the wealthy, are the most oppressed caste. Exploited by the system, the Growers are essentially treated as slaves. Their numbers would easily allow them to rise up, but as it’s the only life they know, it doesn’t even occur to them.

“Culture, like religion, depends on the indoctrination of children before they are able to question or think for themselves. It is critical that the formative years of a Grower’s life be spent in an environment controlled by the church.”

The Book of Bastion

The narrative jumps back and forth between Akachi, a new priest, in charge of a run-down church in a dangerous district, and Nuru, a gang member and street sorcerer just trying to survive in this dangerous world.

Akachi and Nuru are two very similar characters who share many traits and only clash because of the difference in their backgrounds and religion, and the caste-divide—something that sadly happens all over today’s world.

Whereas Beyond Redemption is dominated by various personality disorders, Smoke and Stone is filled with a whole array of drugs. Madness is still an important part of this book, but it is madness fuelled by narcotics instead of psychiatric disorders.

In fact, the entire magic system is based on hallucinogens and drugs. “Beyond the narcotics, there are two materials lending themselves to use in sorcery: wood, and stone.” Powers and abilities are pulled from wood and stone, depending on which god you follow, and sorcerers do magic by using obscene quantities of narcotics—always at risk of overdosing.

The social stratification and class divide are prominent themes in Smoke and Stone, reflected in the ringed structure of Bastion itself.

I wished Fletcher had expanded on the social commentary regarding the caste system, especially the fact that the bankers are nearer to the Gods than the senators and thus economics are placed above the law, and that the Growers are kept in something reminiscent of Victorian workhouses.

“The Bankers are responsible for overseeing the distribution of wealth and goods—including everything made in the Crafters’ Ring—in Bastion. Among their responsibilities is seeing that the Growers, who are neither intelligent nor educated enough to understand even the most base concepts of economics, are provided with food, water, and clothing.”

The criticism of modern society and capitalist bankers is right there, but at times it’s almost too subtle, and I would have liked to see it explored more.

Fletcher did succeed, however, in making me root for the oppressor. Throughout, I empathised with the privileged priest, Akachi, and considered Nuru, and especially her friend Efra, barbaric and uncivilised.

Just like today’s press and many governments, Fletcher managed (whether intentionally or not) to show the Growers as animals. It’s not until the last few chapters that I realised just how much that aspect of the book mirrors today’s society.

As is a usual theme in Fletcher’s work, the characters are mere pawns—even Akachi is nothing but a tool, albeit a privileged one—in a game played by the more powerful, and he ruins his characters by ultimately driving them into madness and self-destruction.

Michael R. Fletcher is one of those dark, twisted minds that I wouldn’t want to meet in a narrow alley after dark, and instead admire from a safe distance. His worlds are filled with possible futures that would scare even Charlie Brooker, the creator of Black Mirror.

Fascinating, memorable and downright terrifying, this is another great novel by Michael R. Fletcher, and I, for one, think he deserves a place alongside other grimdark authors like Joe Abercrombie, Mark Lawrence and Anna Smith-Spark.

Thanks to his terrifying, and imaginative, yet uncomfortable, worlds and stories, Fletcher’s work is unforgettable and about as addictive as the narcotics in Smoke and Stone. 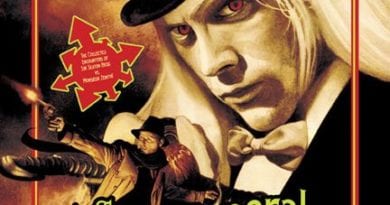 Ontological Combatants: A Review of Michael Moorcock’s The Metatemporal Detective